Thus far in this series on Vineyard Distinctives we’ve covered The Already and the Not Yet, Everyone Gets to Play, The Main and the Plain, Come, Holy Spirit, and A Worshiping Community. This week’s distinctive is the we are called by God to Remember the Poor. What follows is an article on this distinctive from Vineyard USA’s website: 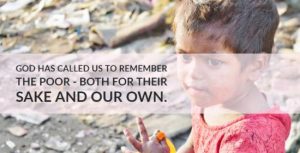 The Poor In The Old Testament

In the Gospels, we see Jesus spending a considerable amount of time among the poor, serving them, encouraging them, and even standing up for them. He was carrying on the deep, rich Jewish biblical tradition of providing for those in need.

These words from the book of Deuteronomy reveal God’s tenderness toward the socially vulnerable:

“He defends the cause of the fatherless and the widow, and loves the alien, giving him food and clothing” (Deut. 10:18).

“If there is a poor man among your brothers in any of the towns of the land that the Lord your God is giving you, do not be hardhearted or tightfisted toward your poor brother. Rather be openhanded and freely lend him whatever he needs” (Deut. 15:7-8).

“There will always be poor people in the land. Therefore I command you to be openhanded toward your brothers and toward the poor and needy in your land” (Deut. 15:11).

“Is not this the kind of fasting I have chosen: to loose the chains of injustice and untie the cords of the yoke, to set the oppressed free and break every yoke? Is it not to share your food with the hungry and to provide the poor wanderer with shelter – when you see the naked, to clothe them, and not to turn away from your own flesh and blood?” (Is. 58:6-7).

The Poor In The Gospels

From these roots, Jesus calls the early Church to commit to seek out the poor and dignify them with their care:
“Looking at his disciples he said: ‘Blessed are you who are poor, for yours is the kingdom of God'” (Luke 6:20).
“The Spirit of the Lord is on me, because he has anointed me to preach good news to the poor. He has sent me to proclaim freedom for the prisoners and recovery of sight for the blind, to release the oppressed” (Luke 4:18).

“…But when you give a banquet, invite the poor, the crippled, the lame, the blind, and you will be blessed. Although they cannot repay you, you will be repaid at the resurrection of the righteous” (Luke 14:13-14).

The Poor In The New Testament

Following Jesus’ example, the apostles and the early Church embody Jesus’ love for the poor:

“All they asked was that we should continue to remember the poor, the very thing I had been eager to do all along” (Gal. 2:10).

“Listen, my dear brothers: Has not God chosen those who are poor in the eyes of the world to be rich in faith and to inherit the kingdom he promised those who love him?” (James 2:5).

“Religion that God our Father accepts as pure and faultless is this: to look after orphans and widows in their distress and to keep oneself from being polluted by the world” (James 1:27).

A Movement That Cares For The Poor

After Jesus’ resurrection, in the earliest years of the Church, the Roman government struggled to care for the masses of widows and orphans overrunning their society. Motivated by Jesus’ model, and realizing that the poor were to be welcomed as Jesus himself, the early Christians addressed the issues of social struggle surrounding orphans and widows. Some scholars suggest this may have been the primary reason the Church grew like wildfire in its first century of life.

Since those early days, the church of Jesus Christ has been marked by our care for the least, the last, and the lost. When the marginalized and forgotten of any society are brought into the center of a loving community that worships Christ, powerful things begin to happen.