Conrad grew up in eastern Pennsylvania, consistently cheering for all Philadelphia sports teams and the Penn State Nittany Lions. At the age of 15, he gave his life to Jesus Christ, receiving him as Savior, Lord, and Friend. Upon graduation from high school, Conrad spent a couple years in Hong Kong, participating in YES (Youth Evangelism Service). It was during a time of fasting and prayer as a young adult in Asia that he first sensed a clear call from God to pastor. Even though he questioned whether or not he was “too weird to be a pastor”, he began following the Lord by faith down this trail.

Conrad has now been involved in church planting and pastoring for over 20 years. Along with his wife Vicki, he participated in a church planting team to begin a non-denominational church in the city of Reading, PA. Also, more recently, he helped start Crossway Vineyard Church in the town of Urbana, OH, where Conrad served as the founding pastor for approximately 10 years.

Conrad loves his family! He has been happily married to his wife Vicki for 23 years. They have twin daughters, Bryn and Lydia, who are both taking college classes. Their youngest daughter, Ellie, is a freshman in Marysville High School. The Eshes are living in downtown Marysville and loving where God has placed them! Erin has been working at Vineyard Church of Marysville as the Church Administrator since 2015. She feels blessed by and loves her job and the work and people that it brings her.

She has been married to Tim Wallace since 2005 and has four children (Kendall, Tommy, Collin, and William), one daughter-in-law (Hannah – married to Tommy) and three grandchildren with him. She was raised in a huge German-American family; since then, family has been her number one priority. Her hobbies include knitting, cross stitch, writing, and cooking.  She also likes to play Minecraft with William and is a huge geek. She is passionate about children, showing them the love of Christ and building them up into children in Christ. She is a 2020 graduate of the Vineyard Institute and the School of Kingdom Ministry. 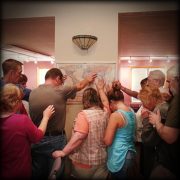 We understand the value of leadership in the context of teams. We’re just better together! With that said, our Pastors/Elder Team meets every week to assist our senior pastor and pastors in caring for our church family.  Empowered by the Holy Spirit, these men and women help discern and implement God’s direction for our congregation.